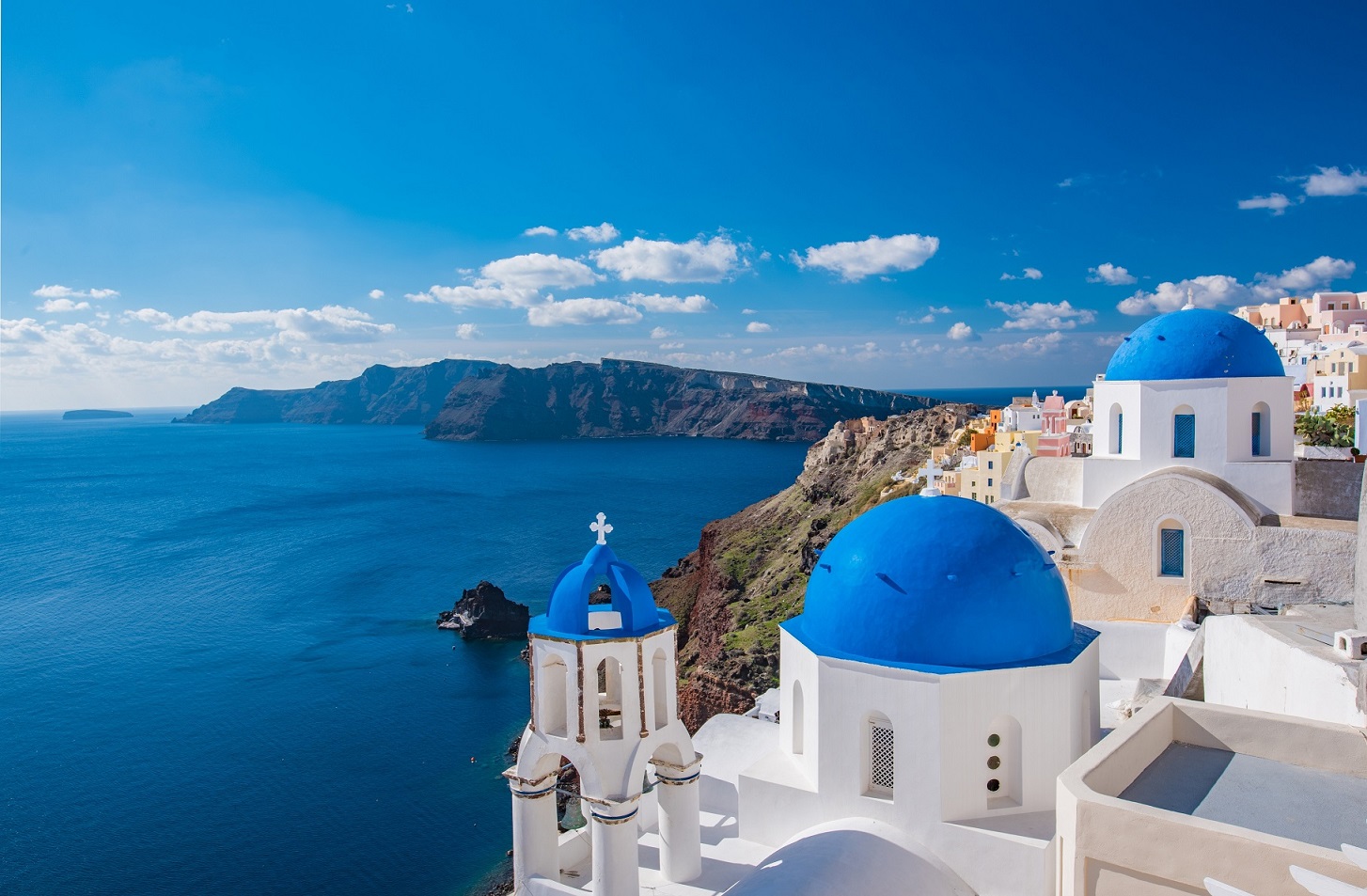 Highlights & Tour Itinerary
Highlights
- Visit Athens, the energetic capital of Greece.
- Stroll in ancient Delphi where the oracle was making prophecies.
- Visit the extraordinary cliff-top monasteries in Meteora.
- Ferry to Mykonos, a picturesque island with windmills.
- Relax at the beautiful island of Santorini.
Summer Schedule 2020 Shared Group Holiday: The tour operates every Monday (until 26th Oct), Tuesday (until 27th Oct) and Saturday (until 24th Oct). Thursday tours are operated only on 2nd July, 16th July, 6th Aug, 20th Aug, 27th Aug, 03rd Sep, 10th Sep, 17th Sep, 24th Sep, 01st Oct and 08th Oct.
Tour Itinerary
3 nights in Athens.
1 night in Kalampaka.
1 night on Mykonos.
1 night on Santorini.
Day 1: Athens Airport – Athens Hotel
Welcome to Greece! Meet your driver in the waiting hall Athens Airport, who will transfer you to your hotel in Athens. Rest of the day free to relax or explore your neighbourhood. Overnight in Athens in Aretusa Hotel or similar for the 3* category, in Athens Cypria or similar for the 4* category.
Day 2: Athens Sightseeing – Athens Hotel
In the morning, we will start our Athens city tour. You see the Parliament, the University, the Library, the Presidential Residence (Ex-King Residence) with the traditional guards. Other stops are at the Panathenaic Stadium, where the first Olympic Games took place in 1896, and the Temple of the Olympian Zeus. On foot we proceed to the Acropolis, where you can enter the Pantheon, and the New Acropolis Museum. Finally you will have a walk at the beautiful narrow streets at the traditional area of Plaka to see and admire the Greek culture and architecture. Of course you can make a short stop for a coffee or to taste the famous Greek Souvlaki. At the end of the tour we will drop you off at your hotel. Overnight in Athens.
Meals: Breakfast
Day 3: Athens Hotel – Delphi Visit – Kalampaka Hotel
Pickup from your hotel and head 3 hours for Delphi at the foot of Mount Parnassus, considered by the ancient Greeks as the navel of the earth. See here the Temple of Apollo, the Oracle and the Stadium, where the Pythian Games were held and considered as sacred as the Olympic Games held in Olympia. In the Ancient Theatre more than 5,000 spectators could have a seat. And of course the Museum of Delphi, where you can admire the Charioteer, one of the best bronze statues ever! Delphi is perhaps best known for the oracle at the sanctuary that was dedicated to Apollo during the classical period. After departing Delphi, we will reach Kalampaka, a small traditional town that is built at the foot of the majestic rocky formation called Meteora. Dinner and overnight in Orfeas Hotel or similar for the 3* category, in Grand Meteora or similar for the 4* category.
Meals: Breakfast, Dinner
Day 4: Meteora Visit – Thermopylae – Athens Hotel
In the morning, we will visit the Byzantine Monasteries of Meteora, listed as UNESCO world heritage site. Meteora is a rock formation in central Greece hosting one of the largest and most precipitously built complexes of Eastern Orthodox monasteries, second in importance only to Mount Athos. The six of an original twenty four monasteries are built on immense natural pillars and hill-like rounded boulders that dominate the local area.  We pay an inside visit to two of these monasteries. Return to Athens via Trikala, Lamia and Thermopylae. In Thermopylae we will make a brief stop at the statue of the Spartan King Leonidas. It is a memorial of his battle with his fellow 300 Spartan warriors, supported by 700 Thespian warriors, against thousands of soldiers of the Persian Emperor Xerxes, in 480 BC. Overnight in Athens in Aretusa Hotel or similar for the 3* category, in Athens Cypria or similar for the 4* category.
Meals: Breakfast
Day 5: Athens Hotel – Mykonos Island – Mykonos Hotel
Early in the morning, transfer to Port of Piraeus to take the boat to the Cyclades island of Mykonos. It is popular for its beaches and its exciting nightlife, its picturesque houses. Our bus will pick you from Mykonos port to transfer you to your hotel. Free time to discover the Island of the Winds with windmills from the 16th century. Stroll in Little Venice with its fishing houses at the waterfront of the island. Or walk through the narrow streets of "Matogianni" will be memorable for your vacations, where you can shop clothes and other local items. We propose you to relax at your hotel and enjoy the amazing night life of Mykonos! Overnight in Mykonos View Hotel or similar for the 3* category, in Yiannaki Hotel or similar for the 4* category.
Meals: Breakfast
Day 6: Mykonos Island – Santorini Island – Santorini Hotel
Today take another ferry from Mykonos Port to the famous Santorini Island in the Aegean Sea. Our bus will pick you from port to transfer you to your hotel. You have free time for yourself to explore the beauty of Santorini. Visit one of the volcanic beaches, explore villages with white and blue painted houses and walk along the narrow streets. Enjoy a drink or dinner at one of the hundreds places located just on the rocks above the blue sea. Overnight in Santorini in Zephyros Hotel or similar for the 3* category, in Rose Bay Hotel or similar for the 4* category.
Meals: Breakfast
Day 7: Santorini Hotel – Santorini Airport
We will transfer you to Santorini Airport, to catch your flight to Athens and onwards to your international destination.
Meals: Breakfast