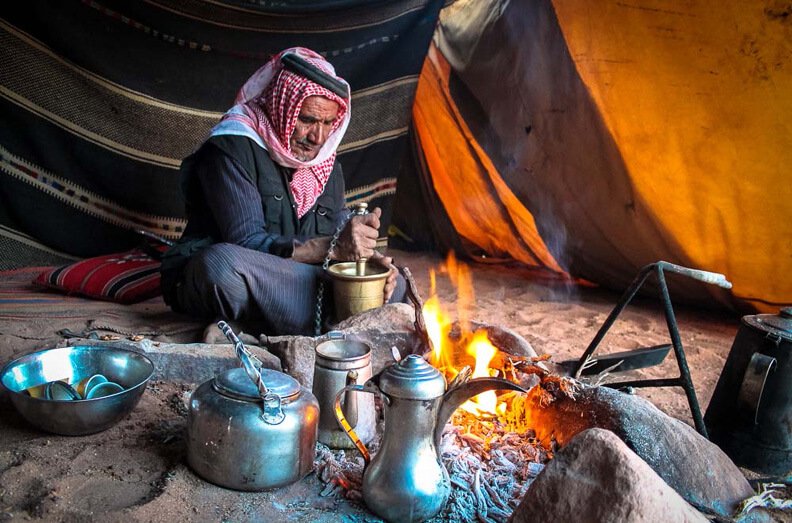 Highlights & Tour Itinerary
Highlights
- Travel along the ancient King’s Way from north to south.
- Visit Petra, one of the New Seven Wonders of the World.
- Roam in a 4x4 in the stunning Wadi Rum desert.
- Float on salty waters at the lowest point on earth.
Tour Itinerary
Day 1: Amman Airport − Amman Hotel
Welcome to Jordan! Our representative meets you with a signage in front of the immigration Amman Airport. Get to know your friendly, English speaking chauffeur. 45 minutes transfer to your hotel in Amman. Overnight at Toledo Hotel or similar for the 3* category, at Al Qasr Metropole Hotel or similar for the 4* category, at Intercontinental or similar for the 5* category.
Day 2: Amman Hotel − Jerash − Amman City Tour − Amman Hotel
Drive 1 hour to Jerash, once a member of the Decapolis, but its heyday had been under the Romans. It is considered as the best example of a Roman provincial city in the whole Middle East. A local guide will make history come alive. Explore the spectacular Forum, the Roman colonnaded street, the Nymphaeum, theatres and the Temple of Artemis. Back in the capital continue to the historical places in downtown Amman. You start with the visit of the Citadel to enjoy views over the hilly capital. On the Citadel itself you see remains from the Roman to the early Islamic period, like the Hercules Temple and the Umayyad Palace, and the small Archaeological Museum. Not far away we find the Roman Theatre, which can accommodate up to 6,000 visitors. In the heart of downtown we stroll the markets (Souq), where to find fruit, vegetables, spices, herbs, clothes, household goods and more. Return transfer to hotel in Amman.
Meals: Breakfast
Day 3: Amman Hotel − Madaba − Mt Nebo − King's Way − Kerak Castle − Petra Hotel
Check-out from hotel and drive to Mt. Nebo, believed to be the burial site of Prophet Moses. If the weather allows you will have like him a view of the Promised Land. In the remains of the Moses Memorial Church, constructed in the 4th century, you see beautiful mosaics. Short ride to the town of Madaba, known for its Byzantine and Umayyad mosaic art. Certainly you see the popular 6th century map of Palestine in the Greek Orthodox St. George’s Church. If open, visit to the St John’s the Baptist Church to climb the bell tower. Afterward we drive to Kerak along the famous ancient biblical caravan route, the King's Way. We have a short stop in Wadi Al-Mujib, a great wide valley with magnificent geological formation. Visit in Kerak the famous Crusader castle built in 1132/34 by King Baldwin I. of Jerusalem. Proceed 2 hours to Petra. Overnight at Petra Palace Hotel or similar for the 3* category, at Petra Sella Hotel or similar for the 4* category, at Movenpick Resort or similar for the 5* category.
Meals: Breakfast
Day 4: Petra Tour − Wadi Rum Camp
Today visit the highlight of Jordan, the red rose city Petra! You are able to start as early as 06:00, but early birds, don’t forget to ask the hotel for a breakfast box the day before. Meet your local guide and pass the narrow canyon, the so called Siq, with its colourful sandstone. At the end you will be rewarded with a view of the most beautiful monument: the Treasury. Continue via the Street of Facades to the Royal Tombs and Pharaoh's Castle. After around 2 hours the guide says farewell to you at the restaurant area. You have free time to explore Petra on your own. The young at heart for instance have the chance to climb the 800 stairs to the 45 meters high Monastery El Deir. Return to the main gate. In the afternoon 1.5 hours transfer to Wadi Rum desert. Dinner and overnight at a campsite like Rum Stars or Sun City.
Meals: Breakfast, Dinner
Day 5: Wadi Rum 3 hours jeep ride − Dead Sea Hotel
Embark a 4x4 and with your Bedouin driver uncover more of the vast desert. The rugged scenery, the changing colours of sands and mountains, the serene atmosphere will make you understand why Wadi Rum is one of the most impressing desert landscapes in the world. The setting had been used for Hollywood movies. You see canyons, red sand dunes, Nabatean rock inscriptions and a natural rock bridge formed over centuries. Journey 4 hours to your hotel at the Dead Sea beach. Chance to do the floating experience and try the dark mud on the shores promising positive effects for your skin. Overnight at Ramada Hotel or similar for the 3* category, at Holiday Inn or similar for the 4* category, at Movenpick Resort or similar for the 5* category.
Meals: Breakfast
Day 6: Dead Sea Hotel − Amman Airport
Depending on your departure time private transfer for around 1 hour to Amman Airport to say farewell.
Meals: Breakfast