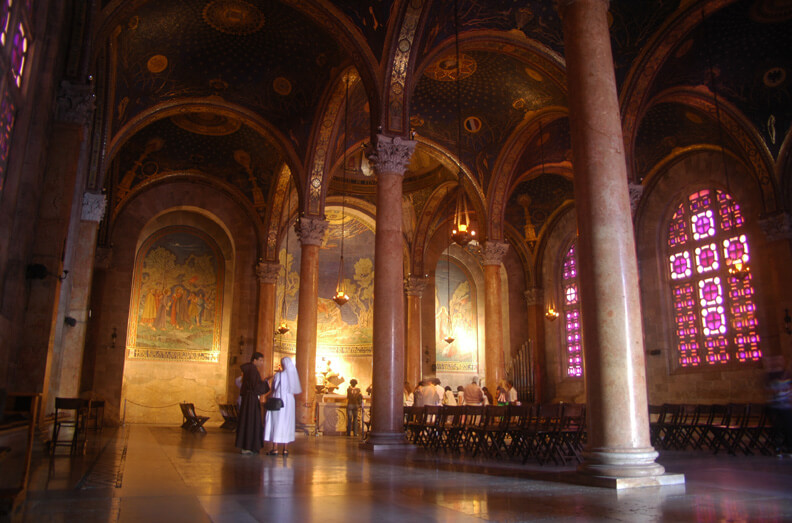 Highlights & Tour Itinerary
Day 1: Amman Airport / Amman Hotel
Meet & greet after you passed through the customs. 45 min. transfer to hotel in Amman, rest of the day is free.
Suggested Hotels: 3* Toledo Hotel, 4* Al Qasr Metropole Hotel, 5* Intercontinental or similar
Day 2: Amman Hotel / Umm Qais / Ajloun / Jerash / Amman Hotel
07:00 pick up at the lobby, two hours drive to Umm Qais which belonged to the famous decapolis, a union of 10 cities & founded by Alexander the Great. In Ajloun, visit the great 12th century Islamic castle by the famous Islamic leader Salah al-Din. Transfer to Jerash, for a 1 hr guided tour where you see Oval Plaza, Roman colonnaded street, the Nymphaeum & Temple of Artemis. Return to hotel in Amman.
Meals: Breakfast
Day 3: Amman Hotel / Madaba / Mount Nebo / Dead Sea / Shobak / Petra Hotel
08:00 pick up at the lobby, drive to Madaba St George Church where you see the famous 6th century mosaic map of Palestine. Next to Mt. Nebo, the place where Prophet Moses gazed the Holy Land before he died. Then to the lowest point on earth Dead Sea where you have free time at the beach & the opportunity to float on water. Drive southwards to the Crusader Castle in Shobak. Transfer to hotel in Petra.
Suggested Hotels: 3* Sella Hotel, 4* Petra Guest House, 5* Movenpick Resort or similar | Meals: Breakfast
Day 4: Petra Tour / Petra Hotel
Tour Petra one of the New Seven Wonders of the World. With your local guide pass the Siq to the Treasury, continue to Street of Facades to the Royal Tombs. The guided tour ends at the restaurant area. Free time to explore on your own. Walk the same way back to the main gate. Overnight in Petra.
Meals: Breakfast
Day 5: Petra Hotel / 3 hrs Wadi Rum jeep tour / Amman Hotel
08:00 pick up at the lobby, 1.5 hrs transfer to Wadi Rum is one of the most impressive desert landscapes in the world. You embark on a 4x4 jeep tour to discover the sand dunes & Nabatean Rock inscriptions. 3.5 hrs transfer to capital Amman.
Suggested Hotels: 3* Toledo Hotel, 4* Al Qasr Metropole Hotel, 5* Intercontinental or similar | Meals: Breakfast
Day 6: Amman Hotel / Allenby Bridge / Jerusalem Tour / Allenby Bridge / Amman Hotel
07:00 pick up at the lobby, drive to the Allenby Bridge to leave Jordan. After crossing the border, your tour guide welcomes you outside Israeli terminal. Drive via the Judean desert to the Holy City Jerusalem. Start with a panoramic view from the Mount of Olives, walk down to the Garden of Gethsemane & the Church of All Nations. In the old city you see the Wailing Wall, which represents the last remnants of the Jewish Temple, destroyed by the Romans. Continue to Via Dolorosa, which leads you to the Church of the Holy Sepulchre, where Jesus Christ was crucified & buried. In the afternoon transfer to Allenby Bridge. Your driver welcomes you, transfer back to Amman.
Meals: Breakfast
Day 7: Amman Hotel / 3 Desert Castles / Amman City / Amman Hotel
08:00 pick up at the lobby. Drive to the eastern Jordanian desert to see three examples of the Desert Castles. Qasr Kharanah, Amra & Azraq. Back to Amman in downtown to visit Citadel, Roman Theatre, stroll at traditional souqs to Jabal Amman with its 19th century houses, then Abdoun to get an idea of the modernity of the city. Back to Amman hotel.
Meals: Breakfast
Day 8: Amman Hotel / Baptism Site / Amman Airport
After breakfast drive to Baptism Site in the east bank of the Jordan River, the place where John preached and baptized Jesus. Transfer to Amman Airport to board your flight.
Meals: Breakfast