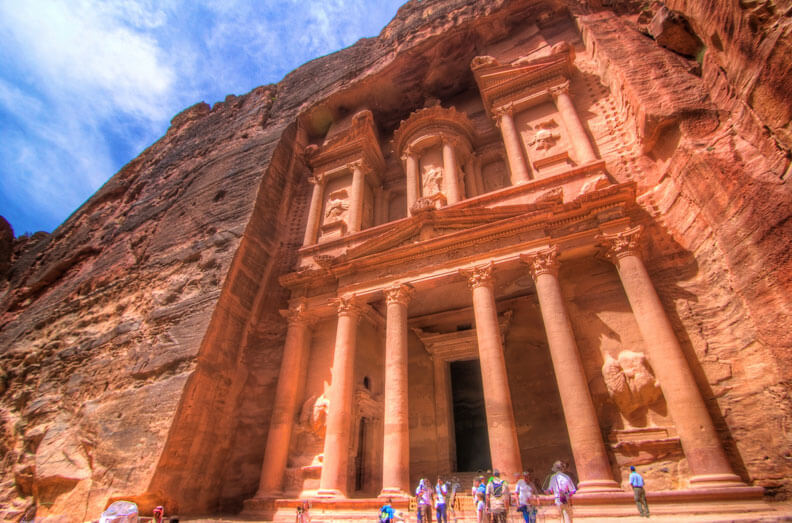 Highlights & Tour Itinerary
Highlights
- Private Jordan Tour with base in Amman.
- Admire the ancient rock city Petra.
- Float on the salty waters of the Dead Sea
- See traces of early Christianity in Madaba and Mt Nebo.
Tour Itinerary
Day 1: Amman Airport – Amman Downtown – Amman Hotel
Welcome to Jordan! Our representative meets you with a signage in front of the immigration Amman Airport. Get to know your friendly, English speaking chauffeur. 45 minutes transfer to Amman. You start with the visit of the Citadel to enjoy views over the hilly capital. On the Citadel itself you see remains from the Roman to the early Islamic period, like the Hercules Temple and the Umayyad Palace, and the small Archaeological Museum. Not far away we find the Roman Theatre, which can accommodate up to 6,000 visitors. In the heart of downtown we stroll the markets (Souq), where to find fruit, vegetables, spices, herbs, clothes, household goods and more. Overnight at Toledo Hotel or similar for the 3* category, at Al Qasr Metropole Hotel or similar for the 4* category, at The House Boutique Suites or similar for the 5* category.
Day 2: Amman Hotel – Petra Tour – Amman Hotel
At 07:00 start your day tour with a 2.5 hours drive along the Desert Highway to Petra, one of the New Seven Wonders of the World. Petra was first established around the 6th century B.C. by the Nabataean Arabs. Meet your local guide and walk to the 1,2 km long, narrow canyon, the so called Siq, with its colourful sandstone. At the end of the Siq you will be rewarded with a view of the most beautiful monument: the Treasury. Continue via the Street of Facades to the Royal Tombs and Pharaoh's Castle. After around 2 hours the guide says farewell to you at the restaurant area. You have free time to explore Petra on your own. The young at heart for instance have the chance to climb the 800 stairs to the 45 meters high Monastery El Deir. Return to the main gate for your drive back to Amman.
Meals: Breakfast
Day 3: Amman Hotel – Madaba – Mt Nebo – Dead Sea – Amman Hotel
08:00 your driver will pick you at the lobby in Amman, holding a sign in your name. Head 30 minutes to the town of Madaba, known as the city of mosaics. You find here examples of Byzantine and Umayyad mosaic art. Visit the famous 6th century floor map of Palestine in Saint George's Church. Free time for a stroll if you like. Continue to nearby Mt. Nebo, believed to be the burial site of Prophet Moses. Like him you overlook the Jordan Valley, the Dead Sea and parts of the Holy Land. In a small church from the 4th century see some beautiful mosaics. Drive to the shores of the Dead Sea, the lowest point on earth. The salty water of the lake lets you float, not swim. Try the mud on the shores supposed to have healing properties for the skin. After free time at the beach return to the hotel in Amman.
Meals: Breakfast
Day 4: Amman Hotel – Amman Airport
Latest hotel room check out is 12:00 noon. Depending to your departure flight transfer to Amman Airport to say farewell.
Meals: Breakfast