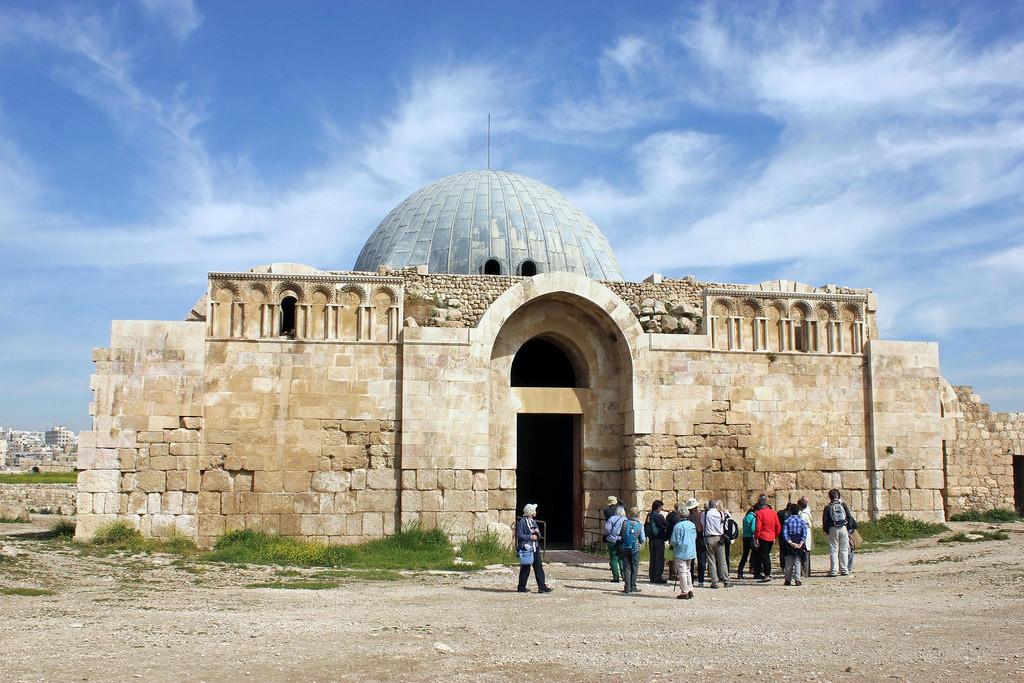 Jordan's castles and palaces are beautiful examples of both Islamic and Byzantine art and architecture, stand testament to a fascinating era in the country's rich history. Their fine mosaics, frescos, stone and stucco carvings and illustrations, inspired by the best in Persian and Greco-Roman traditions, tell countless stories of the life as it was during centuries. These Crusader Castles were used as caravan stations, agriculture and trade centers, resort pavilions and outposts that helped distant rulers forge ties with local people and today they entice many visitors from around the world who wish to explore the ruins of these fortresses. There are many castles and palaces in Jordan, each with an important history. We have chosen the best seven castles and palaces in Jordan based on the most visits during the year. 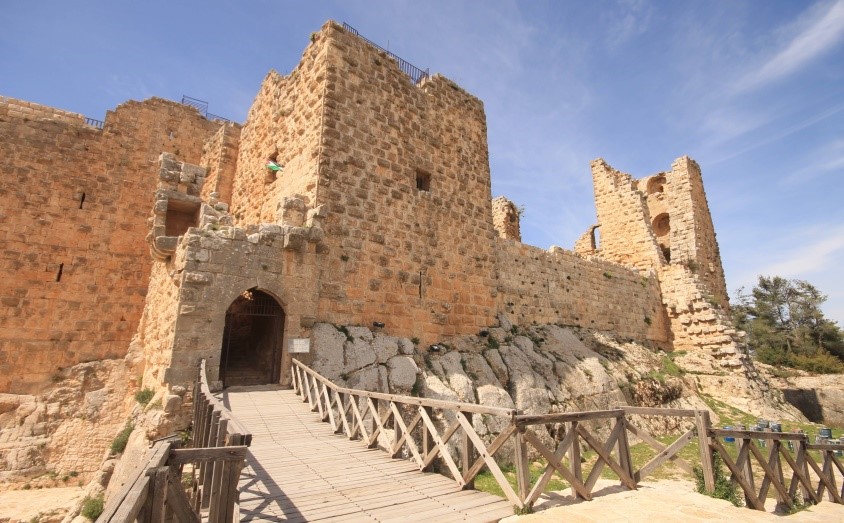 Ajlun Castle, an Islamic fortress, built during the period of the Crusades. The castle is located on the top of a mountain just outside the town of Ajlun. It is approximately 50 kilometers from the city of Amman which takes around one and a half hours by car. Aljoun castle was in a strategic place for defending attacks from the Crusaders.
The castle is an interesting maze of passages and levels. Climb one of the towers and you will reach the top of the castle. From here it is possible to see the rolling hills of the Jordan Valley as well as the desert that surrounds it. The views from the towers are spectacular and well worth the visit. The interior is lit in many places by colorful accent lighting, and the rooms have been almost entirely excavated after earthquakes in 1837 and 1927. The castle is home to a small museum which contains historical information about the castle and a number of artifacts. The museum contains a collection of mosaics and interesting medieval weaponry.
To the side of the castle are many olive groves with picturesque walking trails. The olive groves are best visited in spring when they become adorned with wildflowers, an ideal time for budding photographers.
Aljoun Castle Opening Hours: open daily from 8:00 AM to 6:30 PM. from April to September & 08:00 AM – 04:00 PM from October to March.
Aljoun Castle Entrance Fee: 3 JD. 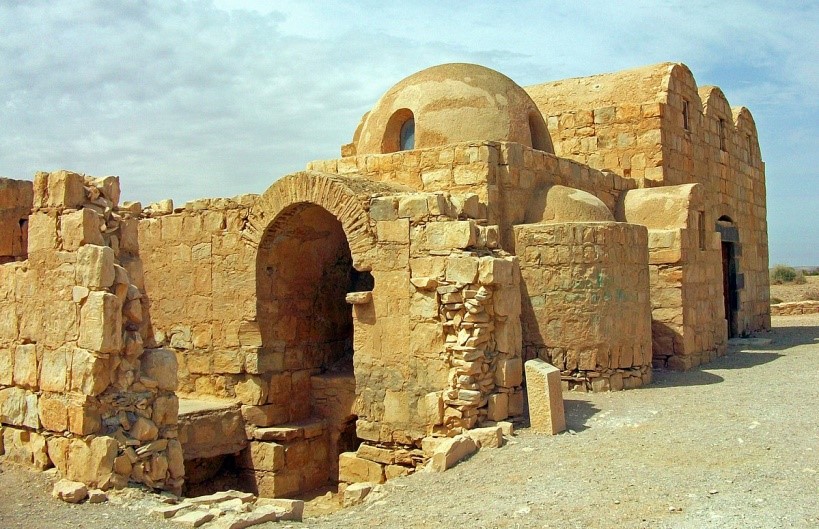 Located in the eastern desert, Qusayr Amra is just over one hour away from Amman and Madaba by car, a small desert castle that formed part a large Umayyad complex which included a bathhouse, hunting lodge and a roadside inn. The site has been so well preserved that it is now a UNESCO World Heritage Site and one of the best places to visit in the region. 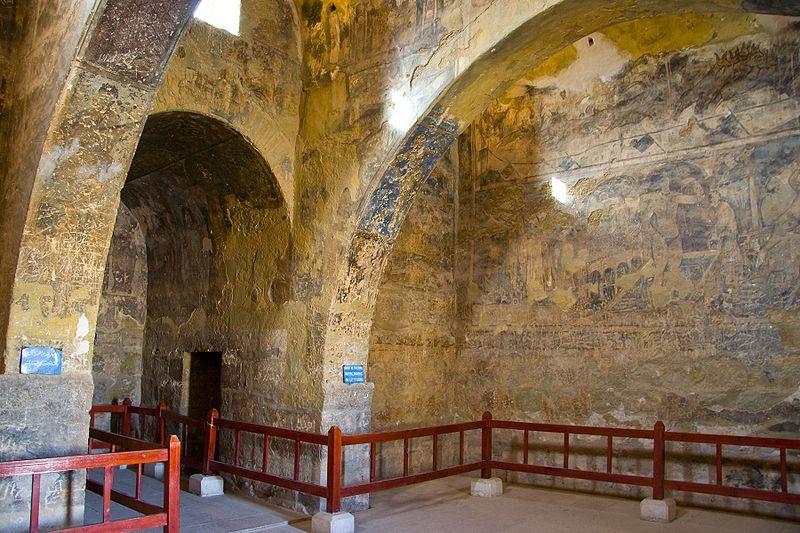 Inside the walls of Qasr Amra hides something truly incredible. After walking past a bathhouse and well, we passed through the large front doors of the castle. You will be astounded by the amazing displays of art that covered the inside of the castle from floor to ceiling. One of the coolest pieces of artwork in Qasr Amra was on the dome above the bathhouse. This painting is believed to be the earliest image of the night sky that was painted on something other than a flat surface.
Qasr Amra Opening Hours: open daily from 8:00 AM to 4:00 PM.
Qasr Amra Entrance Fee: JD 3 per person. This ticket also covers the entrance to Qasr Al Azraq and Qasr Kharanah.
Qasr Al Kharanah 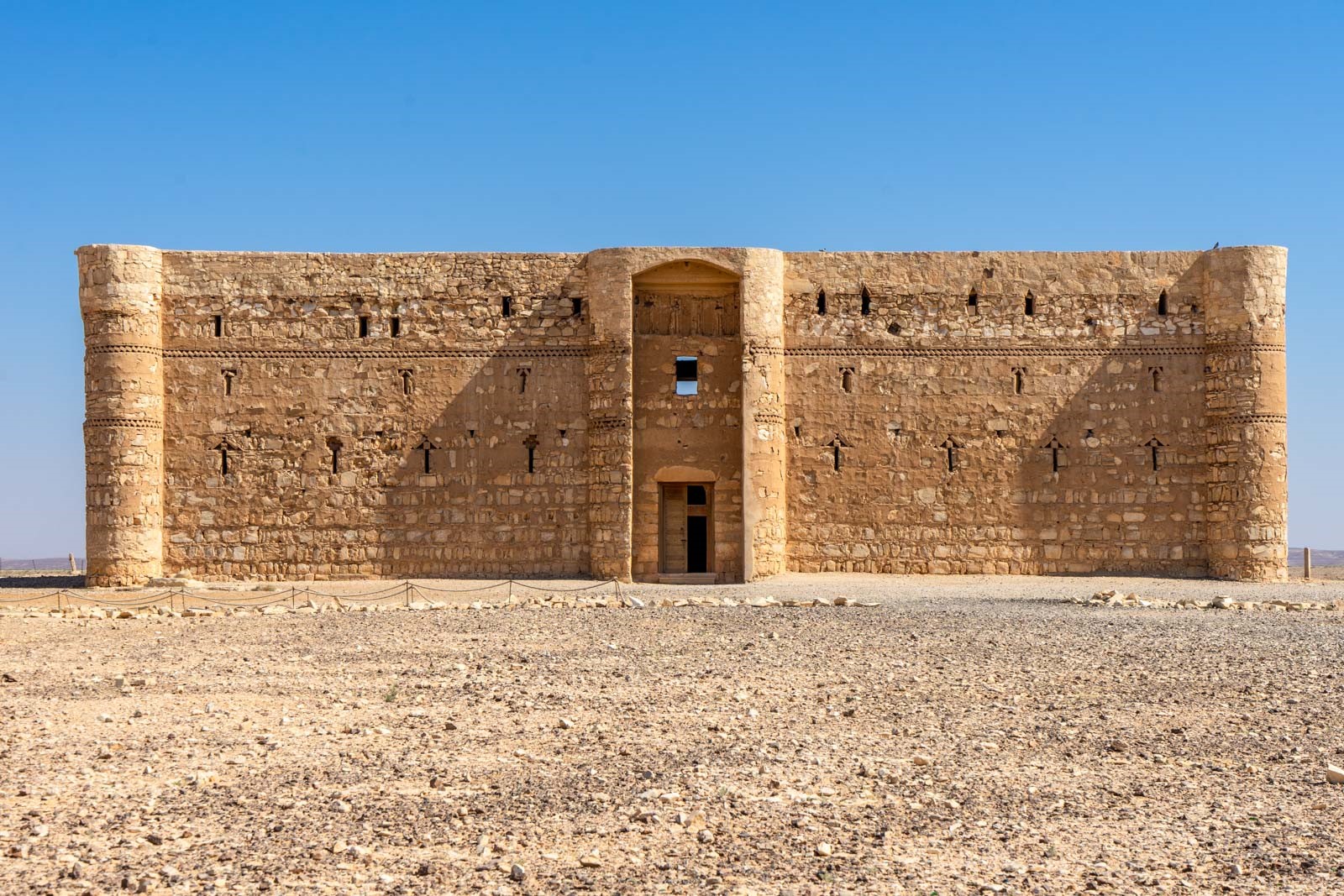 Located just 55 km east of the capital city of Amman, Qasr Al Harrana is a bit of a mystery to many of those who have explored it. Qasr Al Harrana sits on a massive plot of land just off of the highway. Al-Harrana Palace is square in shape, with a length of 35 meters. Its purpose remains unclear today. "Castle" is a misnomer as the building's internal arrangement does not suggest a military use, and slits in its wall could not have been designed for arrow slits. It could have been a refuge for passing camel trains, or resting place for traders.
Inside the castle, the walls are massively thick. At some points, the walls were over 12 ft (4 meters) in thickness as they were part of a complex air-conditioning system that helped keep the oppressive desert heat at bay.
Qasr Harrana Opening Hours: open daily from 8:00 AM to 5:00 PM.
Qasr Harrana Entrance Fee: 3 JD per person. This ticket also covers the entrance to Qasr Al Azraq and Qasr Amra.
Umayyad Palace Amman
The Umayyad Palace is a large palatial complex from the Umayyad period, located on the Citadel Hill (Jabal al-Qal'a) of Amman, Jordan. Built during the first half of the 8th century. While most visitors venture to see the Temple of Hercules or the remains of the Hercules statue, just above the temple is the marvelous Umayyad Palace.
The palace differs in plan and architecture from the rest of the desert palaces in Jordan. It is composed of three main areas; an open space for gathering people with a large water cistern. The second part contains a well preserved and decorated audience hall, built on the foundation of a Byzantine church, Stucco ornaments decorating the hall also reflect Persian influences; narrow columns and arches bearing saw-tooth patterns (which was also found at Kharraneh palace). The third part consists of nine independent buildings which represent the central part of the palace and lie mostly in ruins, but whose foundations are clearly visible.
Umayyad Palace opening hours: open daily 08:00 – 19:00 from April to September & 08:00 – 16:00 from October to March.
Umayyad Palace entrance fee: 3 JD per person.
Kerak Castle
Kerak Castle is about a 1 hour and 45-minute drive (131 km, 81 miles) from Amman. A visit here is often combined with other desert castles in Jordan.
This massive Crusader Castle in Jordan has been the center of battles and sieges. It was occupied between its inceptions in 1142 CE all the way up until 1893 when it housed over 1400 soldiers. 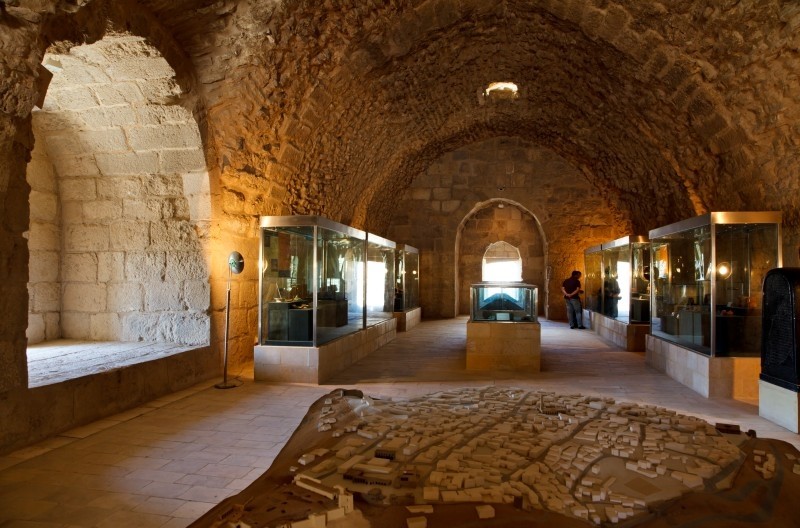 Karak Castle is a dark maze of stone-vaulted halls and endless passageways. The best preserved are underground and can be reached via a massive door. More imposing than beautiful, the castle is nevertheless an impressive insight into the architectural military genius of the Crusaders.
Kerak Castle Opening Hours: open daily from 8:00 AM to 6:30 PM in summer. 08:00 AM – 04:00 PM in winter.
Kerak Castle Entrance Fee:  2 JD per person including the Karak Archaeological Museum.
Shobak Castle 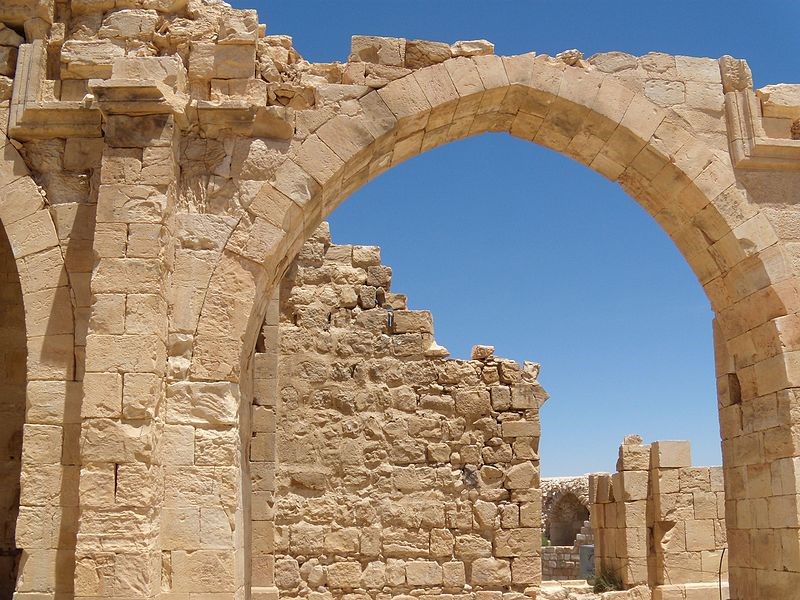 Set atop a mountain, Shobak Castle is an enchanting castle that was built in 1115 under the rule of King Baldwin I. Shobak Castle is located along the famous King’s Highway. A car journey from Amman to Shobak Castle will take around two hours and 35 minutes.
Shobak Castle is particularly striking due to its remote location in the desert which will make visitors feel a world away from home. Within the castle grounds, visitors can explore the churches, historic ruins, and a secret passageway that leads to a charming spring. The castle also boasts a watchtower, catacombs and a number of Christian carvings and Islamic tablets.
Shobak Castle Opening Hours: open daily from 8:00 AM to 6:30 PM in summer. 08:00 AM to 04:00 PM in winter.
Shobak Castle Entrance Fee: 1 JD  per person.
Aqaba Castle 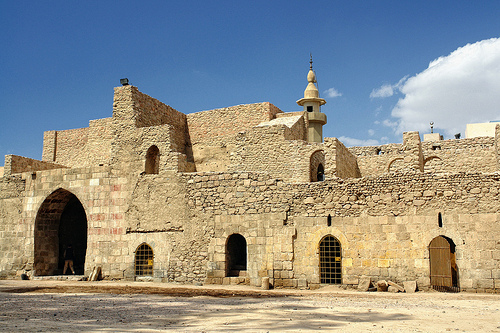 Every corner in Aqaba tells  a tale. The Aqaba Fort offers a glimpse into Jordan’s history. It dates back to the region of the Mamluke Sultan Qanswah el-Ghawri (1501-1517 AD). The fort was used and renovated during many historical dynasties from the Mamluks themselves to Ottomans. Situated on the coastline, it would later on serve as vital base for overthrowing the Ottomans Empire.
During the Ottoman rule, the fort was renovated to serve as station for pilgrims heading to and from the holy lands. During the Arab Revolt, some of the chambers where turned into military barracks.
Aqaba Castle Opening Hours: open daily from 8:00 AM to 05:00 PM in summer. 08:00 AM to 04:00 PM in winter.
Aqaba Castle Entrance Fee: 3 JD per person.
Quick Search
Categories and Posts
Local Cuisine 5 Adventure 5 Things to do 12 Helpful Info 25 Attractions 5 COVID-19 Travel Info 1
Popular Posts