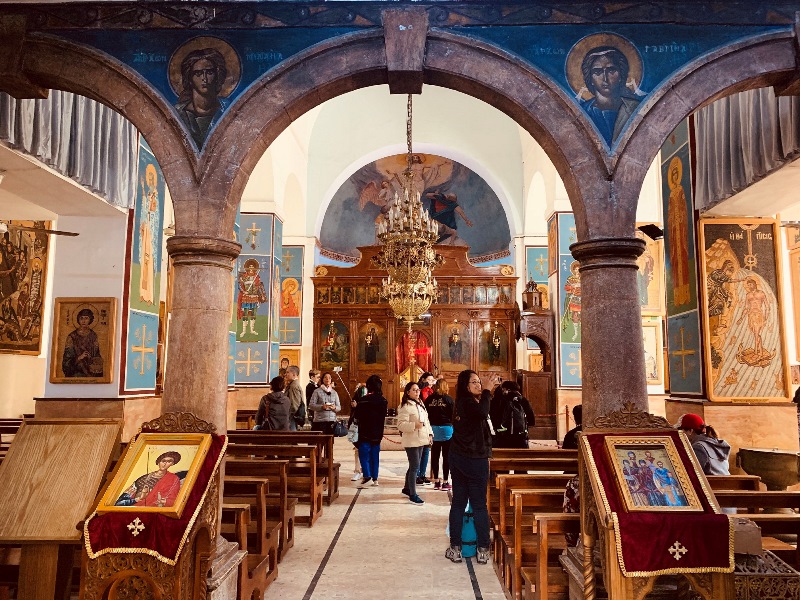 The City of Mosaics or simply Madaba! First question might cross into your mind, is Madaba worth visiting? Is it really a remarkable historical site? My answer is totally YES!

For those who admire History and Ancient Sites Stories this absolutely would be their favorite spot! There is no other site in Jordan filled with more historical monument than Madaba. This historical reason coupled with its location, experience and most importantly the dining.

Starting with the History, Madaba is well known at its Mosaics which are scattered, since 5th century, throughout its churches and homes. Do you want to know why is it a masterpiece? Let us talk about the church which was built over the remains of the Byzantine church since the 6th century, it is called Greek Orthodox Church of St. George. The finest mosaic found to date is still in its original place there. What is fascinating about Madaba, it is predicted that many more hidden masterpieces waiting to be discovered. Riffing on St. George Church details, the church itself looks magical.

One of the weird and interesting incidents, what happens to the church when it was burned before 53 years. There was a drawing for the Virgin Mary that contains her, carrying the baby Jesus with her two hands. Surprisingly, when the fire happened a third hand appeared which indicates that because of her mercy, the church has been saved from burning.

Moving to the other monument, the Archaeological Park, where roads, buildings and churches from the Roman era are preserved. Also it has a Mosaic since the 7th century in the Church of Virgin. One of the highlights of Jordan’s mosaics art is inside this park, specifically in the floor of the Hippolytus Hall, which is inspired by a Greek Tragedy. There is a whole story shown on the floor. There are also scrolls in a corner which are decorated with personifications of the seasons: Spring, Autumn, Winter and Summer and notice the beautiful depictions of flowers and birds. Traces of several historic periods can be found at this site, from Roman to Byzantine, Islamic Umayyad and other periods. Each period built a remark there, giving Madaba a wonderful history. 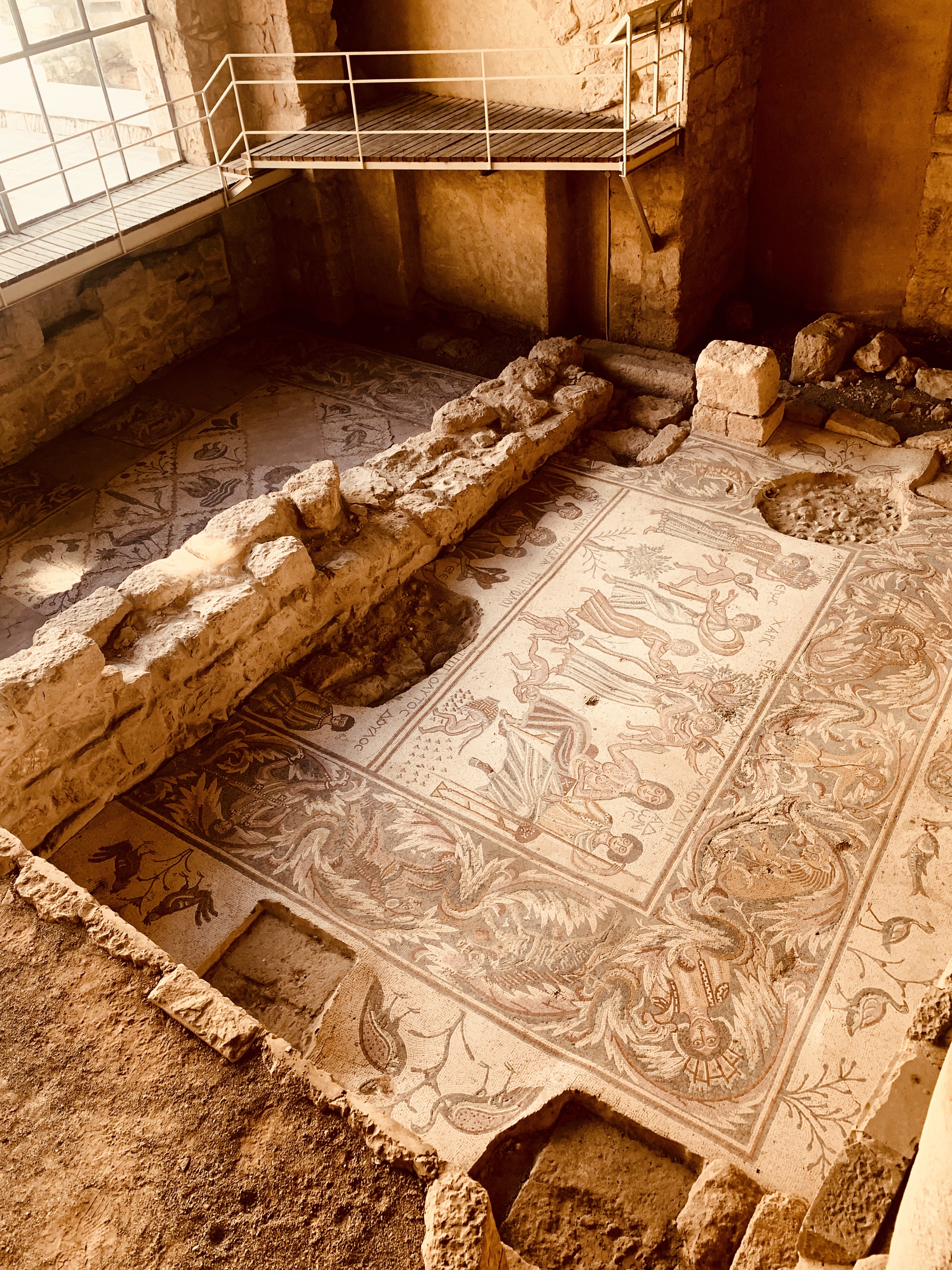 Other site which has religious and geographical significance, is Mount Nebo. There you can easily see the teritorry of Palestine, especially the Dome of the Rock also the Valley of Jordan and the Dead Sea are clearly seen there; because it is up to 680 meteres above the sea level. This site is important for the three revealed religious: Islam, Christian and Jewish since it is closely linked to Moses. 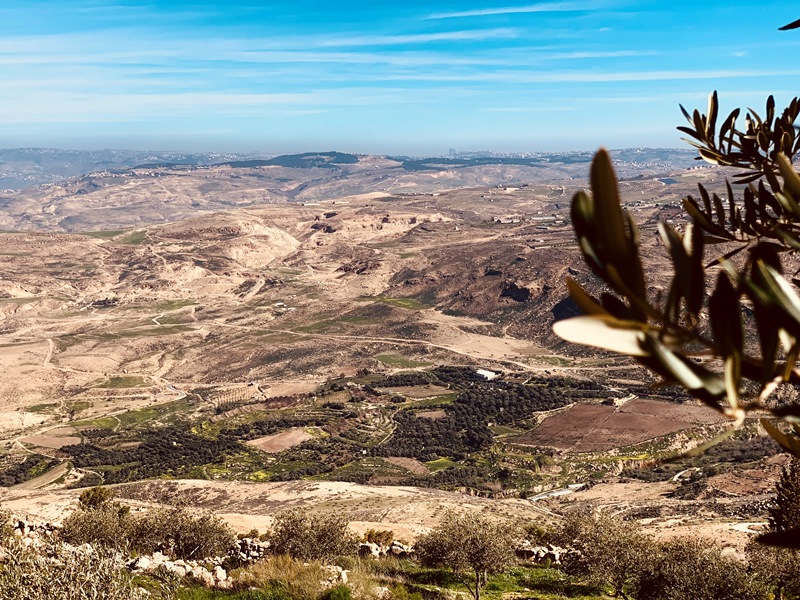 Then comes the Location, Madaba’s location couldn’t be better! You can explore Jordan easily while being in the City of Mosaics. Dead Sea, Baptism Site, Hammamat Ma’in and even the Capital of Jordan, Amman. All of these sites are about 1-hour maximum away from Madaba.

Also the Scene there is overwhelming, it is located at the edge of a hill that drops off to the Dead Sea which makes the view amazing especially it includes several valleys that float towards the Dead Sea. It would be great if you stop along the Dead Sea way to take photos. Below you can see a picture for the view.

Now let us move to the biggest part which is “Food”. Madaba has a special theme of restaurant, it is like you are living in a historic site. The most remarkable restaurant there is Haret Jdoudna. It serves Middle Eastern food such us Hummus, Tabouleh, Kibab, Fattoush, Shish tawouk and Maqdous.

If you really want a Jordanian Taste experience, you can take a lap around Madaba City on foot, seeing some restaurants serves Shawerma since it tastes really good especially Reef Restaurant. And if you are tired of walking, you can find the tastiest Juice Market over there especially the pomegranate flavor, it is called Frankfurter Supermarket. 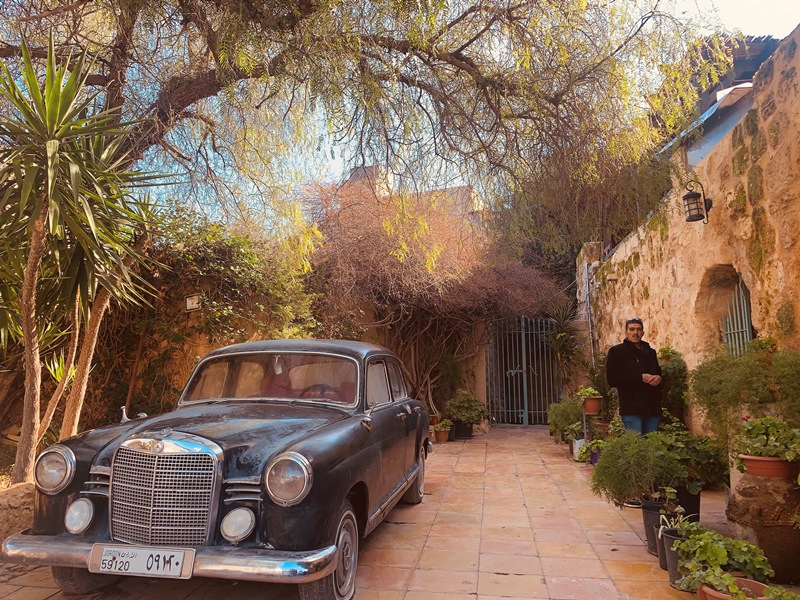 As you can see, Madaba is full of experience. And for your information it is not a crowded city, you can enjoy your day without having headache. The streets are full of stories, when you walk inside the city you will have a glimpse into what Jordan really looks like. You will notice how generous people are. Moving to the markets, the simplicity over there is amazing. Seeing the hand-made carpets and accessories, buying souvenirs to your loved ones and drinking a cup of tea with mint, all of these moments make an unforgettable experience.